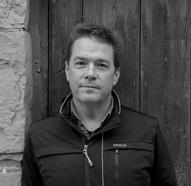 "Neume" is the name of my home studio and a type of ancient musical notation (I believe it was used for Gregorian chant music). I love the word because it expresses both imprecise notation (in other words, there is room for interpretation) and literally, "spirit" or "breath".

I will turn my ear to a proverb...

The guitar has been a passion for Jay Calder for most of his life. As a pastor he had led worship bands for years, but when he started listening to artists like Michael Hedges, Don Ross, Phil Keaggy and other finger-style guitar virtuosos, he discovered a new creative pallet for his own compositions. A few months after Jay's first solo guitar album, "Breakfast With Barnabas" was released, it was nominated at the Canadian Vibe Awards as Instrumental Album of the Year. He began performing solo guitar in a variety of venues throughout Ontario where he received Best Acoustic Artist at the Toronto Independent Music Awards.

He was invited to be a featured performer at the Canadian Guitar Festival and to perform the opening concert at Missions Fest Vancouver. He did a concert with Phil Keaggy in Langley BC; concerts with Steve Bell, Bob Bennett, Randy Stonehill and has toured with: Casting Crowns, Guy Penrod, Avalon, Natalie Grant, The Newsboys… as well as repeatedly sharing the stage with authors Max Lucado and Philip Yancey. Jay and humourist Phil Callaway have together ministered to more than 130 audiences across Canada (and the Caribbean!).